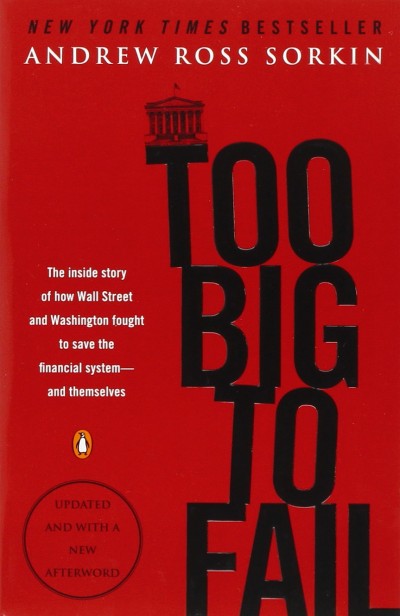 Good Reading: Too Big To Fail

Good reading: Too Big To Fail:  How Wall Street and Washington Fought to Save the Financial System and Themselves by Andrew Sorkin (Viking, 2009) 544 pp.

Four years have passed since the collapse of Bear Stearns, which ushered in twelve months of economic recession and financial market upheaval. To historians of the economic history of the United States and its financial markets, the importance of this period is rivaled only by the Crash of ’29 and the Great Depression. The causes and consequences of the 2008-09 crisis will be debated and continue to be controversial for decades to come, but the definitive narrative will likely remain Sorkin’s Too Big To Fail. In 544 pages of gripping day-by-day description of the major participants and developments, Sorkin admirably captures the pulse of Wall Street and Washington during these unforgettable months. The passage of four years provides a fresh perspective for a re-read of this to-be classic, and the book should be required reading for young professionals entering the investment industry.

The most dramatic and historic events of this chaotic year occurred in September of 2008.  In less than 30 days, the financial landscape was forever altered. Mortgage giants Fannie Mae and Freddie Mac were taken over by the government. Lehman Brothers filed for bankruptcy. Merrill Lynch was sold to Bank of America in an eleventh-hour rescue. American International Group, the largest insurance company in the U.S., was put on government life support. Morgan Stanley and Goldman Sachs, in a desperate effort to avoid a similar fate, rushed to become bank holding companies thereby gaining unlimited access to the Federal Reserve’s discount window. The failure of Reserve Primary Fund triggered a panic run on money-market funds that threatened to disrupt the entire financial industry. The Dow Jones Industrials commenced a plunge with unprecedented volatility that by March of 2009 measured 50%.

Sorkin’s narrative centers on the indefatigable and at times frantic efforts of Treasury Secretary Paulson, Fed Chairman Bernanke, and New York Fed head Geithner to steer the financial system through this perfect storm. As they were painfully aware, their actions constituted the biggest intrusion of the U.S. government into free-market capitalism in the country’s history. For this they were and continue to be condemned by many politicians and market commentators. Their defense is that their actions were necessary to prevent financial and economic Armageddon. Bernanke stated in a critical meeting with skeptical congressional leaders: “I spent my career as an academic studying great depression. I can tell you from history that if we don’t act in a big way, you can expect another great depression, and this time it is going to be far, far worse.” In an oval office meeting with President Bush, Paulson said: “If we don’t act boldly, Mr. President, we could be in a depression deeper than the Great Depression.” Sorkin sides with Bernanke and Paulson: “To be sure, if the government had stood aside and done nothing as a parade of financial giants filed for bankruptcy, the result would have been a market cataclysm far worse than the one that actually took place.”

If Paulson, Bernanke, and Geithner were driven by a determination to save the U.S. economy, the heads of the major Wall Street firms and U.S. Banks were motivated by less lofty considerations.  These titans of American finance worshipped at the altar of personal status, money, and power.  On occasion they expressed concern for their shareholders and employees, but there is no mention of a desire to protect the public good. An example occurred in October, when the CEO’s of the 9 major firms were summoned by Paulson, Bernanke, and Geithner to a make-or-break meeting to approve an injection of taxpayer money into the financial system as a desperate step to restore stability. With tens of millions of American jobs at stake, the initial reaction of Merrill-Lynch CEO John Thain was to complain that such a step might result in changes in Wall Street executive compensation policies.

In an insightful epilogue penned in 2009, Sorkin offered the sober conclusion that the big Wall Street firms and banks remained too big to fail. He asserted further that ego, greed, and a “vulture capitalism” that abuses clients, which were a major ingredient in fomenting the turmoil, were still salient characteristics of Wall Street. Nevertheless, much has changed since the years and months leading up to 2008, and the likelihood of a similar financial upheaval is now remote. The overheated housing market and abuses in the mortgage industry, which precipitated the crisis, now seem to be a unique phenomenon of the past. The banks and investment firms are much better capitalized, much more sensitive to risk, and far more heavily regulated. The government has also learned from the experience, and is far more vigilant and better equipped to identify and respond to excesses before they imperil the entire financial structure. In retrospect, the cataclysm of 2008-09 created widespread economic suffering for millions of Americans, but it also provided a beneficial wake-up call. Sorkin’s book will be a reminder to generations to come of how perilous the situation was and thereby serve as a deterrent to a future crisis.