The US and Global stock markets are enjoying a banner year. The S&P 500 Index rocketed +18.5% in the first six months of 2019 (the best first half since 1997), which included +7.1% in June (the strongest June since 1938). International equities have also enjoyed substantial gains: the MSCI All-Country World ex-US Index (ACWX) has climbed +13.4% this year. What lies ahead after such lofty returns? Despite the remarkable first half, we consider the outlook to be mixed, reflecting widely divergent views on three critical issues:

Since the Trump administration levied tariffs on Chinese goods over one year ago, sharp stock market swings have occurred regularly. When tensions rose, most indices sold off in response, such as in the fourth quarter of 2018 and May 2019 when the MSCI All-Country World Index (ACWI) retreated -12.7% and -7.3% respectively. In contrast, reports of negotiation progress and easing tensions led to meaningful relief rallies in January and June. The clock is running out on accomplishing a productive agreement; the negative effects of tariffs are already biting into profits and eroding business confidence and capital expenditures. Both sides have stated a desire to reach a deal but have found it difficult to compromise on major issues. At this point, it is difficult to predict any specific outcome with a high degree of confidence. Consequently, our recommendation to investors is to avoid strategies based upon a very positive or very negative scenario.

With respect to central banks, their policies wield powerful influence on a country’s economy, currency, and financial markets. Over the past year, many of the key banks have increasingly indicated concerns for slow growth and below-target inflation and have stated that they are prepared, if needed, to provide stimulus. This is now the case in the European Union, Japan, India, Australia, most of South America, and, significantly, the US and China. The Federal Reserve is widely expected to reduce its target interest rate in July for the first time since 2007, and many investors anticipate multiple rate cuts later this year. Historically, central bank rate cuts have provided powerful economic stimulus that has boosted flagging equity markets. If the Fed balks, global stock prices almost assuredly will respond negatively. Further complicating matters, monetary policy will be influenced by trade considerations. For example, the economic gains achieved through a US-China resolution will reduce pressure to cut rates. As we see it, future Fed action is as enigmatic as future trade conditions and prudent investors should maintain a position of flexibility and data-dependency. 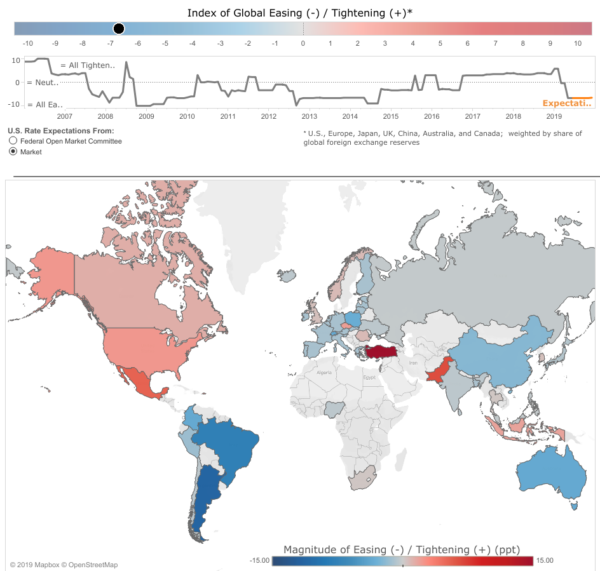 The International Monetary Fund and other forecasters currently expect global growth to deteriorate for the remainder of this year. The world’s two largest economies, the US and China, have the greatest potential to turn around the projected weakness. The US is slowing and risks continuing down this path, with negative consequences for corporate earnings, without some stabilizing monetary and/or fiscal stimulus. However, we do not anticipate a recession and the most probable scenario includes a pickup in corporate profits by year-end. China’s GDP has been decelerating for 15 years from the double-digit rates of the mid-2000’s to 6.5% in 2018, and the government is determined to hold the line at 6.0%. Government officials have already adopted numerous policies to reverse a slumping economy, which was apparent even before tariffs were enacted, with uncertain result. Since these two countries account for about 40% of global GDP growth, their success will determine whether the world’s economic situation will flourish or languish.

The US stock market will continue to benefit from a variety of supports. Stock buybacks and merger and acquisition activity show few signs of letting up. The bond market does not offer attractive returns to draw investors out of equities. Many common stocks provide dividend yields in excess of bonds and money market funds and some investors, especially retirees, depend on stocks to provide essential growth of principal to fund withdrawals. This is not to denigrate bonds, which remain useful to investors desiring to dampen portfolio volatility and reduce their allocation to equities.

In summary, we see many positive economic factors that run concurrent with rising risks and negative data. Moreover, key determinants cannot be easily predicted at this time. In a market expected to remain highly volatile with the distinct possibility, if not probability, of a correction sometime this year, we suggest that investors give careful consideration to their equity ratios.