Global financial markets are focused on developments within the US relating to COVID-19, the economy, and government stimulus. While forecasting during this extraordinary period continues to be abnormally difficult, we expect the US economy will continue its asymmetrical recovery. This supports a modestly positive outlook for equities. The fourth quarter will also bring considerable clarity to the political landscape and we will be three months closer to a coronavirus vaccine with further improvements to testing and treatments. As the fog of uncertainty lifts, the path to corporate profit growth will become apparent. The major risk to our forecast is a double-dip recession, which could be caused by widespread shutdowns following a surge in virus cases or failure of the US government to adopt additional stimulus.

We continue to deal with the economic effects of the global pandemic. Our modestly positive outlook is dependent on the path of COVID-19. There remains considerable uncertainty surrounding the future course of the virus, with health experts allowing for a wide range of possibilities. Our short-term forecast is that the next three months will look much like it does now: a steady rate of new cases, or hopefully a slight decrease, with scattered hotspots. There still exists the potential for severe devastation from a surge in cases – but, in our view, this would likely force congress to provide a swift and substantial relief package to keep households and businesses solvent, which would support the economy and be positive for the stock market. We do not in any way want to minimize the physical, social, and financial suffering this pandemic has already caused nor the further damage that will occur. Our goal here is to consider the financial market impact and our major point is that the downside to investments is limited so long as the government stands ready to provide economic support.

We are closely watching the negotiations in Washington to provide further financial relief. This is the area where political developments will have the most effect on the markets. With election day less than four weeks away, we note that the stock market has been resilient and even slightly positive as political polling remains steadily in favor of Vice President Biden. While Democratic gains in the upcoming election would increase the possibility of higher taxes and business regulation, it also would likely drive up the size of the eventual stimulus bill. According to Goldman Sachs in their October 5, 2020 research note, Democratic control of the Presidency and both Houses of Congress would lead to a surge in economic growth. Alternatively, continuation of a Republican led government will further a business-friendly deregulatory agenda and possibly more tax cuts. Ultimately, we caution investors not to overemphasize the market impact of this or any presidential election as, historically, markets have advanced under both parties. 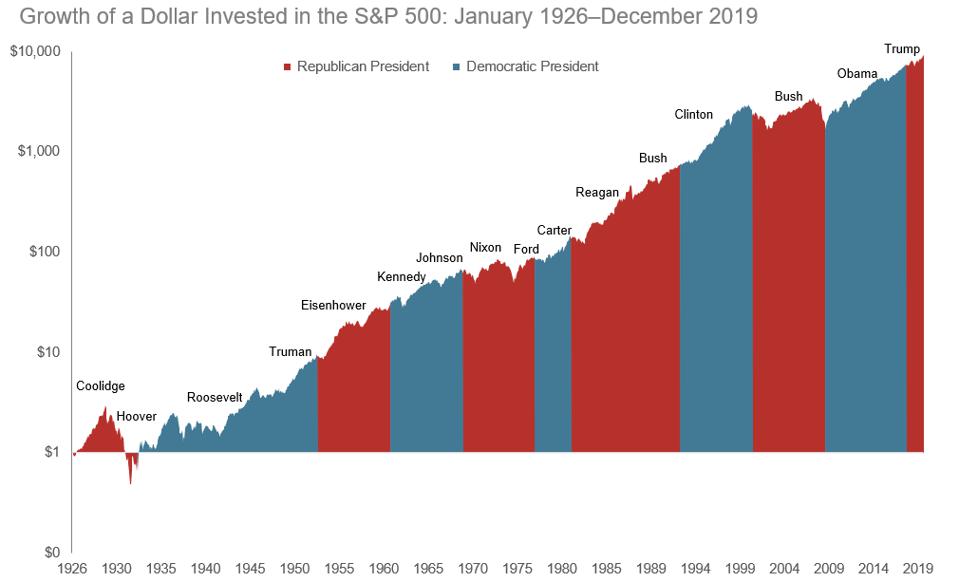 The election will undoubtedly dominate the news for the next month but, in the context of financial market outcomes, it will not likely play a large role.

Of great consequence to global stock markets is the health of the US economy. The recovery thus far has been mainly due to unprecedented government stimulus and reopening from historic shutdowns, rather than a healthy expansion. Some industries have snapped back quickly, while others have only returned to a fraction of their pre-COVID levels. The travel industry will remain depressed for the indefinite future: the TSA measures air passenger traffic –67% from this time last year and Smith Travel Research shows the hotel occupancy rate –31% year over year. On the other hand, online shopping was up 44% in the second quarter and will flourish for years to come. While we think the worst of the recession is behind us, future gains will likely be more gradual and remain uneven. The labor market illustrates the challenges of the current situation: while unemployment is improving, permanent job losses are rising at an alarming rate.

The Federal Reserve has expressed its clear determination to support the economy; it has launched the most expansive bond buying program in history and lowered the fed funds rate to zero. Despite these immense efforts, Chair Jay Powell has stated emphatically that additional government stimulus is necessary to bring much needed relief to millions of Americans. At greatest risk is consumption, which makes up two thirds of US GDP. Without new fiscal support, the economy will be at risk for giving back its realized progress.

Aside from a new federal stimulus bill, the key issue driving the US stock market is expectations for next year’s corporate profits. The virus situation, action from policymakers, and economic realities will all influence earnings sentiment and determine which industries and investment styles outperform. While aggregate S&P 500 earnings are expected to rise, the disparity between industries is widening. The current business environment is one of “haves vs have-nots.” Companies that benefit from a socially distant world have returned to earnings growth, while others remain heavily damaged. As a complete eradication of COVID-19 becomes increasingly unlikely in the short- to medium-term, we prefer companies in industries able to quickly return to earnings growth. This includes technology, home entertainment and improvement, housing, and health care. Volatility is often the companion of uncertainty, so until the major issues become more definite, we expect financial markets to remain choppy. Our cautiously optimistic view of the US stock market is further supported by extremely accommodative Federal Reserve policy.

International economies are also experiencing economic strain due to the pandemic. As with the US, global GDP projections are very uncertain. On October 6, the Managing Director of the IMF, Kristalina Georgieva, succinctly captured the situation:  “The global economy is coming back from the depths of the crisis. But this calamity is far from over. All countries are now facing what I would call ‘the long ascent’ – a difficult climb that will be long, uneven, and uncertain. And prone to setbacks. “

Amid rapidly changing conditions from country to country and potential new waves of the virus, we think the most effective strategy is to focus on companies able to thrive in the current environment. Many international companies are benefiting from similar trends rewarding US equities. High on the list is the work-from-home trend which favors numerous global technology companies and online retailers. Yet another interesting opportunity is provided by companies with products designed for building improvements and HVAC systems. Finally, we think the China pledge to be net carbon neutral by 2060, along with strong global commitments toward reducing carbon emissions, is a major trend to consider.

The Eurozone is determined to recharge its economies. The region has adequately managed the virus thus far, although new hot spots have emerged. The unprecedented stimulus passed in 2020, including $857B in grants and loans from the EU and almost $3T in additional monetary stimulus from the European Central Bank, will prevent worries of the collapse of weaker economies and strengthen the economic union. This response is much more effective than the actions taken during the Financial Crisis of 2008-09 and gives us confidence in a sustained recovery, which should support higher stock markets.

A special comment needs to be made about China, which is the only major country expected to achieve GDP growth for the 2020 year. A strong Chinese economy is essential for a global economic recovery. Recent trends provide some optimism: public transit ridership in China is back to 100% of pre-COVID levels, domestic travel is up to 80%, and schools are open. However, there are still signs of lingering weakness. Consumer spending during Golden Week, the national holiday period from October 1 – October 8, was depressed from 2019 levels, although improving from the lockdown periods of the 1H2020. Further, the ongoing trade war between the US and China and rising clashes targeting individual companies remains a potential headwind. Despite this political risk, many Chinese companies are incredibly profitable and should be considered for opportunistic investors.

The US bond market was stable throughout the third quarter and yields are expected to trade in relatively narrow ranges for the remainder of the year. The benchmark 10-year US Treasury Note, for example, fluctuated between 0.51% and 0.81% over the past three months. The Federal Reserve, in a determined commitment to support the economy, has promised to keep yields low for the foreseeable future. There is animated discussion among economists as to whether the massive fiscal and monetary stimulus will prove to be inflationary, but we do not anticipate a meaningful increase as long as the economy is being adversely impacted by COVID-19. Longer bond maturities offer higher yields, but the risk to principal resulting from an economic updraft far outweighs the benefits of a further decline from the current low yields. Although bonds remain a bulwark against potential recession, current yields are relatively unattractive to income-oriented investors.

We hope all our readers stay safe and healthy.