On Wednesday, the Dow Jones Industrial Average fell a numbing 800 points and the S&P 500 Index dropped 3%. The financial media attributed the declines to an “inverted yield curve” in the US Treasury bond market. Historians quickly pointed out that such an inversion preceded each of the last six US recessions, alarming investors across the globe. 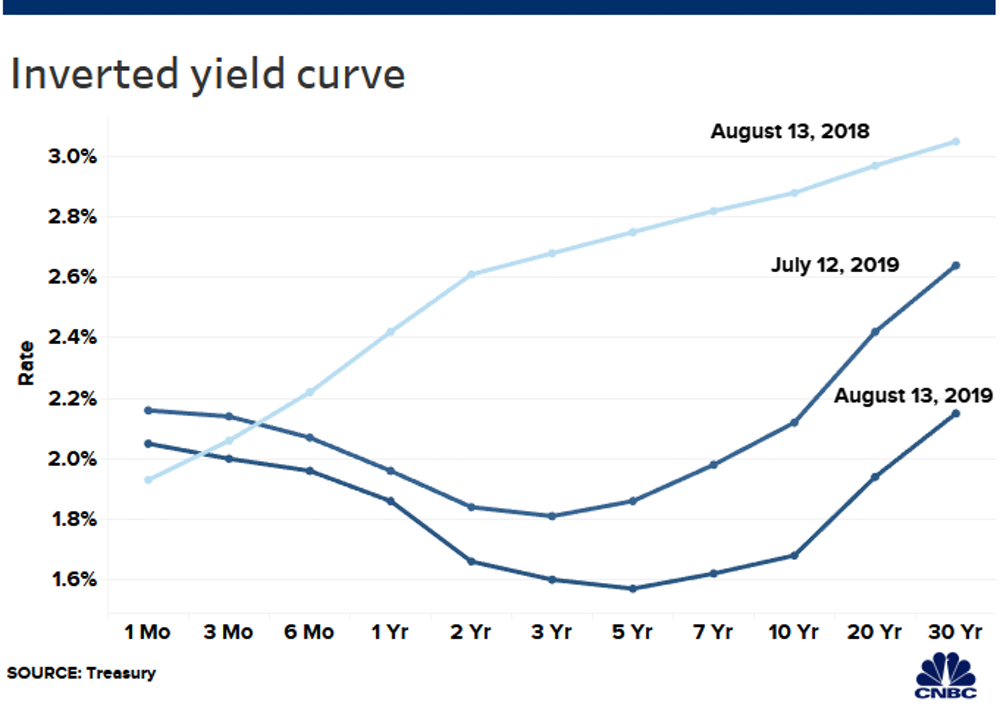 During normal economic expansions, yields for longer-dated bonds are higher than shorter-dated bonds because longer time periods carry more interest rate risk. An inverted yield curve occurs when the yields of shorter-maturity US Treasuries, such as 90-day or 2-year notes, are higher than longer-maturity 10- or 30-year bonds. Historically an inversion has occurred for several reasons, but four of the last six inversions included a booming economy, rising inflation, and the Federal Reserve raising short rates in order to curb future inflation. This is not the case with the current inversion. Since October 1 last year, 10-year Treasury yields have plummeted from 3.22% to 1.53%, and 30-year Treasury yields have reached all-time lows, whereas short-term rates are little changed from 10 months ago. A variety of reasons have been put forward to explain this phenomenon, but it is worth noting that it is a global as well as US situation. Currently, an unprecedented $15 trillion of sovereign bonds are trading with negative yields.

Should investors be alarmed and implement strong defensive strategies? The yield curve inversion historically has been a long-leading indicator of recessions. Past recessions, however, have arrived on average 21 months later and never earlier than 8 months following 2-year/10-year inversions. Further, the stock market during the last three inversions (1988, 1998, 2005) has risen 36.7%, 43.2%, and 28.8% respectively during the interval between the inversion and the subsequent market peak. Nor is it the case that a recession is unavoidable. There are opportunities for governments here and abroad to take corrective actions to restore confidence. This includes a meaningful thawing of US/China trade tensions as well as the adoption of stimulative fiscal and monetary policies around the world. For example, we are confident that the Fed will respond in September with another rate cut, and possibly a third in October or December, which may well reverse the inversion.

The inverted yield curve complicates an already cloudy economic outlook. Clearly the global economy is slowing, but there continues to be impressive strength in consumer spending, rising wages, and lofty small business sentiment. On the other hand, as we have pointed out in our most recent Outlook, conflicting data regarding the US economy is concerning, especially the sharp drop in bond yields. Consequently, we continue to recommend that investors placing importance on preservation of capital remain cautious and flexible.

Quote of the day: “If you’re not confused by the outlook, you just aren’t paying attention.” -Steve Liesman, CNBC