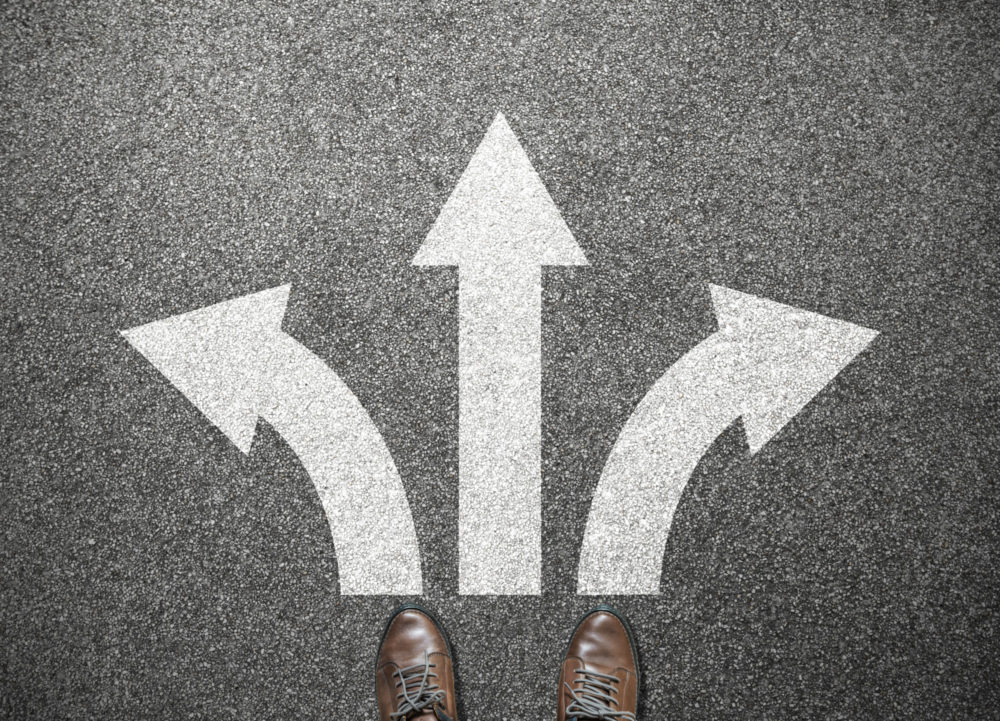 The Three Paths Ahead

Global stock markets in recent days have exhibited unusual levels of volatility in response to headline news. Daily developments impacting the future of US-China trade relations, Federal Reserve policy, the price of oil, inflation, and a possible inverted yield curve in US treasuries have rocked the markets.

We strongly recommend that the best policy for US investors coping with tumultuous conditions is to avoid reacting to these news developments and focus rather on the next 12 months. In our estimate, there are three most likely outcomes to emerge in 2019:

We forecast 2019 US GDP growth to be 2-2.5%, down from our 3% estimate in 2018, with corporate profit growth to rise 7-9%, down from this year’s 20% surge. Our view is consistent with the consensus of economists and investment professionals. Such a successful soft landing in combination with the improved valuation of the stock market will likely result in a S&P 500 Index advance in the 7-10% range.

There are two major threats to this modestly optimistic view. The first is a possible outbreak of a major trade war which would have a stagflation consequence and in the process leave the Fed in a “no-win” policy dilemma. We think that political leadership in both China and the US have come to the conclusion that both sides lose with higher tariffs. In the case of China, where the economy is already slowing and the government is adopting increasingly potent stimulus measures to maintain growth, a significant slowdown resulting from a trade decline could trigger social and possibly political unrest. The Trump Administration recognizes the necessity of a strong economy and healthy stock market going into the 2020 national elections and a trade war on top of an expected 2019 slowdown would probably make that impossible.

A misguided policy implemented by the Fed is also unlikely. Chair Powell and other FOMC members have recently emphasized their awareness of the necessity of basing policy on data rather than what could prove to be an incorrect forecast of economic strength and inflation. As the economy slows in 2019, we expect employment gains and inflation to moderate and cease to be a major concern for Fed policy.

There are two equally likely, yet divergent, market responses if the US economy continues to produce GDP gains at or above 3%. In the first case, strong labor gains would lift inflation and force the Fed to raise interest rates. The stock market in this scenario would be concerned that the rise in short-term interest rates would eventually result in an inverted yield curve, a recession, and a bear market as has happened so often in the last 50 years. In the second case, expressed most recently by the Trump Administration, strong GDP growth will not be accompanied by above-target inflation and there will be no need for further monetary tightening. This might be the best of all possible worlds leading to a significant rally in global stock markets.

This highly negative scenario anticipates that the coming slowdown in the US economy and profit picture would be exacerbated by misguided aggressive tightening policies from the Fed and/or an escalation of trade wars. Here the US economy would be threatened by a recession of indefinite severity and duration and most likely foment a bear market.

We recommend investors exercise discipline and patience and base their strategies on a longer-term perspective. This includes consideration of their unique preferences regarding growth and preservation of capital. Growth investors can view the recent market correction as a long-term buying opportunity. In contrast, investors whose top priority is to preserve assets should be more cautious. In any case, the recent volatility should be used as an opportunity to review investment objectives and guidelines.